Michael "Jr" Tash was born in 1965 in Silver Spring, MD. He has been around music from an early age. Mike's father, Ken, had been a singer in the DC area during the 60's and had established an impressive collection of records from the classic singers of the 40's and 50's. Little did he know this had quite an impact on the budding guitarist. In 1975, something happened to launch Mike into the world of music - KISS. Once he saw Kiss he knew he had to play the guitar. He got his first guitar - a cheap acoustic - at age 11. Next came high school and the electric guitars and loud amps, as he moved into the world of heavy metal.

In the early 80's Mike met DC guitarist Steve Jacobs and discovered the blues. The original Bad Influence was formed in 1988 with bassist Rick Haveland, who gave Mike the nickname "Jr" due to the age difference between them.

For almost 25 years, Jr has been a fixture on the East Coast blues circuit. He has performed at numerous clubs, festivals, made multiple appearances at NAMM shows, and was recently inducted into the Northern Virginia Blues Hall Of Fame.

"...Edsall is amongst the DC area’s finest harp players, able to distill Little Walter, George ‘Harmonica’ Smith, Sonny Boy Williamson and Slim Harpo into a personal style..." from In A Blue Mood Online

Considered among the top of the list of blues harpists in the mid-Atlantic region, Roger Edsall combines a mix of styles from classic pioneers Little Walter and Sonny Boy Williamson, as well as everybody's contemporary guru, Kim Wilson. Born in Alton, IL - the birthplace of Miles Davis - it was destined that music would be in Roger's blood.

Roger has shared the stage and the bill with the likes of Maria Muldaur, the aforementioned Kim Wilson, Kenny Neal, Jimmy Thackery and a host of others (including Hizzoner Marion Barry - not something everyone can boast!). it's clear that the savvy of veteran musical experience has served Roger well and is clearly displayed on Bad Influence gigs and in their award-winning recordings.

Roger is currently endorsed by Hohner Harmonicas and Peavey Electronics.

The man with the feel and that voice, Washington, DC native Bob Mallardi picked up the bass at an early age. His father Joseph and mother Louise had verey strong musical bacgrounds that they carried with them from their roots in the old country.

Growing up, Bob's older brother Bill would play records from James Brown, Booker T. & the MG's, The Meters, Roy Buchanan, Canned Heat, and assorted Motown artists. This foundation would fuel his musical growth through stints with many DC area bands including the Bluescasters, and in 1995 he joined Bad Influence. Bob's melding of blues and soul is a big part of the band's unique identity.

Bob joined Bad Influence in 1993 and is is featured on "Where We Been", "Tastes Like Chicken", and "Under The Influence".

Bob is currently endorsed by GHS Strings and Hartke Amplifiers. 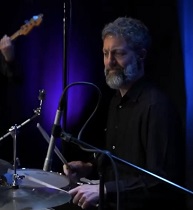 This native Virginian began playing drums over 35 years ago and has been an active figure in the Washington, DC music scene since 1997. After several years in the Atlanta indie rock scene, drum study in New York, and the Richmond Blues scene he landed the gig with surf guitarist Danny Morris, recording one album and touring extensively throughout the eastern U.S. and Caribbean for 5 years. He then took over the drum chair for guitar legend Tom Principato in 2002 recording 4 WAMA award winning albums and performing numerous tours of the U.S., Canada, and Europe.

Joe plays some kind of drums, cymbals and uses sticks.