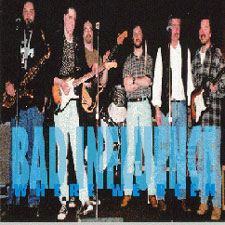 Where We Been was recorded between May and July of 1996. This one features Bob Mallardi on bass & vocals, Roger Edsall on harp & vocals, Jay Corder on sax, Michael "Jr" Tash on guitar, Ed Lehner on guitar, and everyone's friend, David Thaler on drums. Two songs feature Tom Swanton and Fred Hillyard from the original Bad Influence lineup.

This is a CD that the whole family will enjoy!

"BAD INFLUENCE'S 'Where We Been' lays bare the band's influences, and as such the album is akin to a 13-tune program in how to acquire a taste for the blues."
- Mike Joyce, The Washington Post January 17, 1997

"Other contemporary Blues bands may be original and even better, but Bad Influence does a great job mustering up all the emotion and grit they possibly could hope for."
- John Fortunato of NY CD Blues