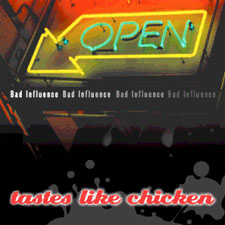 This is the record that put Bad Influence on the map! Produced by Jr & Timm Biery, Tastes Like Chicken features Bob Mallardi on bass & vocals, Roger Edsall on harp & vocals, Jay Corder on sax, Michael "Jr" Tash on guitar, and the golden boy, David Thaler, on drums. We even had some very special guests on this one - Pete Kanaras from the Nighthawks, Mary Shaver, Janine Wilson, Cindy Cain, Jay Monterose, and Eric Sharamek; all doing what they do best - playing and singing!

Read what people have to say about Tastes Like Chicken...

Like a lot of blues bands around the country sustained by a regional following, Bad Influence can get along merely by saluting its precursors. But the local band's latest release offers something more ambitious -- a solid collection of original material spiced with humor and soul.

Of course, "Tastes Like Chicken" is familiar in many respects. The quintet's affection for horn-powered jump tunes, harp-laced blues and lazy grooves is evident from the opening tracks. There's nothing fussy about the band's sound or the way it puts a lyric across. Though their music draws on both vintage and contemporary hues, sticking to the blues basics seems a way of life for these guys. They're also supported by some like-minded musicians, including Nighthawks guitarist Pete Kanaras and singers Mary Shaver, Janine Wilson and Cindy Cain.

This time around, though, Bad Influence has put a lot of work into the songwriting. Four members of the band contribute tunes to the mix, including harmonica player Roger Edsall and drummer David Thaler, who penned a couple of amusing songs informed by a distinctly Washingtonian perspective -- "Don't Forget Your Nightclothes" and "D.C. Driver." Edsall is also responsible for "Cat Fight," a swinging, cross-harp romp, while guitarist Michael "Jr." Tash and bassist Bob Mallardi add songs that are boisterous, mournful and romantic by turns. More than anything else, these new tunes are what make "Tastes Like Chicken" such appetizing stuff. - - Mike Joyce (© 2001 The Washington Post Company)

Ron Weinstock of the DC Blues Society says "The recording is good and holds up musically to the better blue wave bunch of bands like Little Charlie & the Nitecats or Rod Piazza & the Mighty Flyers. This is a solid recording that does not wear out its welcome with repeated listening."

Swing fans will like this CD. If there guys are not dancers, then they are just in touch with the type of jam that gets a dancer on their feet. Even the slow song on the CD could be used as a slow (really slow) selection in an advanced Jack and Jill. If you like your sound spiced with a rhythmically charged harmonica and sax and fueld by a little rocking guitar, you will groove here. Although basically bluesey, some of it is fast enough to Eastcoast or Lindy Hop to - but many of you will hear Westcoast and hit the slot running. Although the vocals are gutsy and interesting, each song has plenty of music jam to syncopate to. This CD is certainly one that all dj's should have and you will hear quite a few of these cuts. I am continually impressed with these guys. - - DJ Toonz (© 2001 5678 Magazine)

Hailing from the DC/Maryland area, Bad Influence is muscular five-piece unit featuring Roger Edsall's tasty harp and strong guitar from Jr. Tash. Guests on this outing of eleven originals include the Nighthawk's Pete Kanaras, who supplies the effective six-string on Don't Forget Your Nightclothes. Tash goes over the top occasionally, leaning toward a rock feel for the humorous D.C. Driver, but Edsalls Cat Fight is a powerful few minutes with nice chromatic harp work, and Jay Corder offers solid sax to a handful of other tracks. Good writing skills, blue-collar vocals, and better-than-average delivery show throughout.

This is the second Bad Influence disc I've had the pleasure of recording and mixing. However, for me, "Taste Like Chicken" is truly the first Bad Influence record; while "Where We Been" was a great example of their abilities as performers, arrangers and vocalists, this time out they prove themselves to be great songwriters as well.

Honest, witty and heartfelt lyrics sit on top of music that takes what is "blues" to a different place, yet always seems familiar; solos that sing, laugh and cry......grooves that take you from a '40's dance hall to a modern dance club. And throughout it all, you can feel the camaraderie of these guys.

This is a band! They pull for each other, stepping forward, stepping back at just the right moments, always thinking of what's right for the song. So do yourself a favor............buy another copy of "Taste Like Chicken" to keep in your car.